10 Lessons from 10 Years in Business 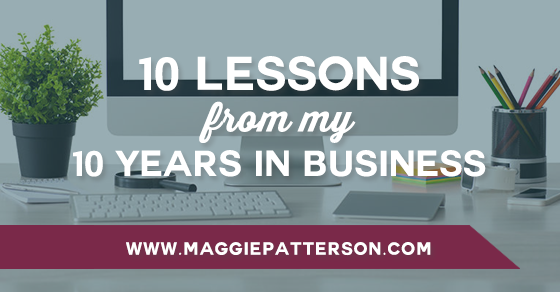 While I was away frolicking on the beach in Hawaii and wearing copious amounts of SPF 60, a big milestone came and went.

On May 13th, it was my 10th anniversary in business. That means a lot of things, starting with I’ve defied the odds and this is the longest I’ve “worked” anywhere. It feels big and it’s exciting, as I know the next 10 are going to bring some of the best possible things imaginable.

When I set out on this adventure, I just wanted to make enough so that it was a viable plan for me not to head back to work after my year long maternity leave. Armed with a business plan typed up in MS Word and a Staples low rent business card, I systematically put the word out to my network. My husband and I agreed that I had until September to make $4K/month, as that would more than meet our financial needs.

No savings, no parachute, I jumped out of the plane. Thankfully, we did have his income so the mortgage and the bare minimum was covered, but the pressure was on. In under 60 days, that goal was blown out of the water and it’s only grown from there.

There’s a lot of things that have gone into making this all happen, and I’ve reflected a lot on this. (More than is probably normal, because hello, #introvertproblems. There’s a lot of time spent in my head.)

Here’s a quick list of the lessons learned from 10 years in business:

#1. Find Someone Who Believes in You More Than You Believe in Yourself.

Hands down, that was my husband, but I had a whole legion of cheerleaders as I got the ball rolling. No one ever questioned my decision. I’m not sure if that’s because they’re scared of me or my friends and family know that there’s no stopping me when I make a decision. (It’s probably both, because I don’t take kindly to people saying I can’t do things as I discussed in this post.)

Maybe it’s not your partner, but a friend, a cousin, a sister, but you need someone who’s there to help you pick up the pieces when you’re a hot mess and you feel like you can’t go on. And those days are going to happen…

#2. Some Days, Some Weeks Are Going to Suck Hard.

These are the days when you fantasize about of all things, getting a job. Because many days working for someone else would be a million times easier than this thing you’re doing. Until you realize that no matter what, this beats the alternative so you fire up the coffee, wine or vodka and get on with it.

And sometimes, it’s okay to tap out, lie on the couch and watch 8 hours of Lifetime movies. As long as  you pull yourself together the next day – it’s restorative.

I’m not exactly delicate about language at times, because sometimes a good cuss word is the best possible way to get your point across. And if you’re the word police, please move along – because it’s not a sign of lack of intelligence or low education. (My sentiments are summed up nicely by S.E. Sinkhorn in this post.)

But there are exceptions. Starting with when the CEO of the company calls you at home during dinner time from overseas and kicks off the call labeling you a fucking idiot. (I maintain this is purely because he’d already ripped the balls off his entire team and killed their spirit, so he had to move on to me.)

In that case, all bets are off. Within minutes I’d turned around, called my day-to-day contact and terminated the contract, effectively immediately. You NEVER have to accept that type of abuse. Even if you are a bitch (which I completely am at times) but no client has the right to tell you that, especially during your dinner.

Take the time upfront to find good clients, and when you find ones you love, hold on for dear life. Seriously. These types of clients where you just get each other, can work in flow and you don’t have weird issues with invoices unpaid at 60 days are a beautiful thing.

So how do you find great clients? Don’t ignore the warning signs. In the consult process, have a checklist you run through looking for indicators that this is NOT going to be a good fit. And then just say no.

Saying no is hard, it’s painful to reject money. But honey, that money is never worth it. If your gut says no, it’s a no. The end.

#5. Hire People Who are Smarter Than You Are.

Hiring is hard. Especially when you’ve been the CEO, the director of marketing and the janitor. I know, because I’ve been a one woman show more years than I care to admit.

But if you hire people who are really good at what they do, giving up control becomes so much easier. Set the systems in place and let them do their thing. But remember they aren’t mind readers.

And always look for people who are committed to what it is you’re building. Because if they are “in” it with you, they’re going to go the extra mile and stick around for the long haul. (Special shoutout to the team who makes things happen behind the scenes here – even this blog post is a team effort.)

When I moved into the role of account manager at my old job, my mentor gave me a really important piece of advice “always vent up”. Meaning you shouldn’t use your team to unload all your business baggage.

Yes, you can be honest, but you don’t have to use them as your sounding board for every little thing. Which is where your brain trust comes in.

This is your short list of go-to people for when you need to work out the details, talk through situation, brainstorm or go on a business getaway. They’ve got your back and if you worked in an office together, you’d be going out for drinks together on Friday night to recap the week.

Most of all, they are people who get where you are. The ones you can share your big money goal and they hold that vision for you without rolling their eyes. They make you want to do better, because you’re all growing together.

Until 2 years ago, I didn’t realize the actual state of my money mindset. I mean, I had money, things were good, but oh my word, I had some major issues that were standing between me and finding flow.

It’s a long list, and it continues to be a work in progress. But I’ve gotten up close and personal with my money, worked with a coach to fix my entire story around money and things are much calmer.  I go much longer between the moments where I’m wondering if the bottom is going to fall out or being anxious about the balance in my bank account.

Handling this has made my business so much simpler as I don’t have issues asking for money, raising my prices or anything else. If you want to make more money. Fix your money mindset. Sounds a bit out there, but it works.

#8. Not All Hustle is Created Equal.

I come from the hustle hard school of business, where if you hustle hard you’re rewarded. But not all hustle is created equal.

There’s busywork like hanging out on Facebook all day “networking” and then there’s hustling. When you’re hustling you’re focusing on getting the highest value activities done. Learn the difference between a to-do list designed to make you look like you’re doing something while you’re avoiding the stuff you should be doing, and the type of hustle that bring in clients and revenue.

#9. Sometimes It’s Just Not That Deep.

Show up, do your best and move on. Know where the meaning really is, and what it’s okay to not be reading more into, because I can guarantee that you’ll end up stuck and positively paralyzed by trying to make a mountain out of a molehill.

#10. Want a Competitive Advantage? Do What You Say You’re Going to Do.

Sounds pretty simple right? So how can that be a competitive advantage? It just is here in the wild West of the Internet. Starting with deadlines. If you say Tuesday close of business, don’t deliver it Thursday morning with no reset of expectations.

Don’t over promise and under deliver. Make realistic promises and then over deliver. Because that’s all too rare. If you can to that I fully believe you’ll stand out in a sea of pretty shitty services and dubious results.

From your revenue to your conversion rates, you need to make friends with math. Numbers matter in your business and hold magical powers. What you need to grow is likely hiding out right within your business. Instead of chasing unicorns and pots of gold, get your sales and marketing math in order.

What’s the biggest lesson you’ve learned in your business so far? What’s been the most surprising?