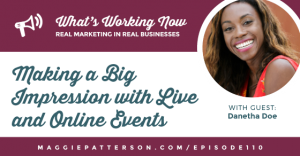 Are you hiding behind your screen and avoiding interacting with “real” people in your business? If you want to get noticed, you need to start hustling so you can make a big impression. As part of the What’s Working Now series, Danetha Doe, a business strategist and brand ambassador shares her secrets to getting [...] 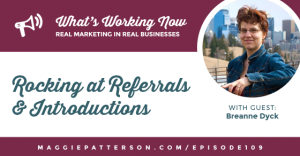 We all talk about referrals and how powerful they can be, but most people really don’t do a great job at making them happen. Breanne Dyck joins us to share her awesome spin on referrals – asking for introductions and shares exactly how that’s impacting her business. [smart_track_player url=”http://traffic.libsyn.com/marketingmoxie/MMoxie109.mp3″ title=”MM109: Breanne Dyck – Rocking [...]

Episode 108: Holly Gillen – Powering Up Your Biz with Periscope 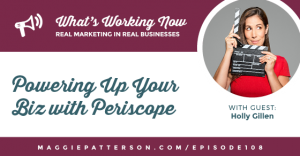 One of my fave video pros, Holly G joins us today to talk about Periscope.  She covers what it is, how she’s using it and the #1 thing you need to consider before you dive in as part of the what’s working now series. [smart_track_player url=”http://traffic.libsyn.com/marketingmoxie/MMoxie108.mp3″ title=”Episode 108: Holly Gillen – Powering Up Your [...] 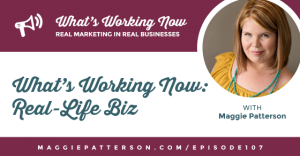 We’re kicking off a new series today on the show talking about what’s really working right now for actual business owners. Expert advice is well and good, but we only really know what’s going to work by doing. In the coming weeks, I’ve got a series of business owners sharing marketing tactics and their results. [...]

Episode 106: Alexia Vernon – Spreading Your Message Like a Pro 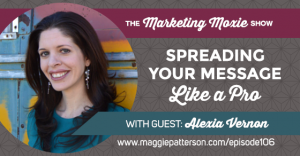 Speaking is about so much more than speaking, it’s about spreading your message and connecting with your audience. Alexia (Lex) Vernon joins us today to talk about how to speak as a total pro move, how to make the most of your time on stage and what it really takes to land a TEDx [...] 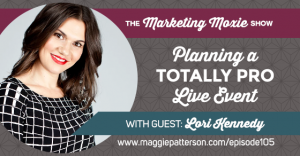 Live events are the thing of nightmares and cold sweats for most of us, but Lori Kennedy has been running a successful event in the health space for the past four years. Lori’s going to share the need to know for any live event, what to plan for and how they can help you go [...] 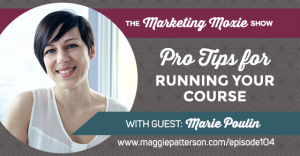 Courses, programs, group coaching…all of these things are seen as the gold standard in the online world as they bring you passive income. Last week we talked about what launching a program looks like, but what happens when you actually run that course? Marie Poulin, the creator of Digital Strategy School joins us today to [...] 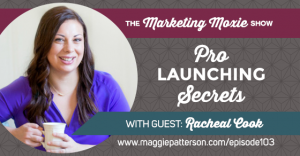 Today we’ve got Racheal Cook from Rachealcook.com and the creator of Conscious Business Design joining us to talk launches. I invited Racheal as she’s launched her signature program more than 10 times and has a lot of pro launching secrets. During this interview she shares what a  launch really looks like, why you’re not likely [...] 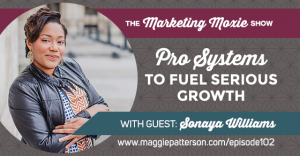 Systems are one of those things that feel so constricting, but when you have the right systems in place, you can grow your biz and flourish says my guest Sonaya Williams. If you don’t know Sonaya, you need to, she’s the brains behind the people, systems and tools in many big name businesses, and she’s [...] 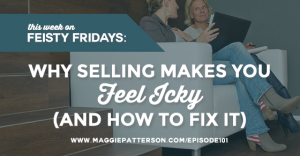 Few people come with the salesperson gene and it feels super awkward to ask for money or sell. This episode is a short one that breaks down how to get your head aligned so you can actually sell your thing. [smart_track_player url=”http://traffic.libsyn.com/marketingmoxie/MMoxie101.mp3″ title=”Episode #101 – Why Selling Makes You Feel Icky (and How to Fix [...]