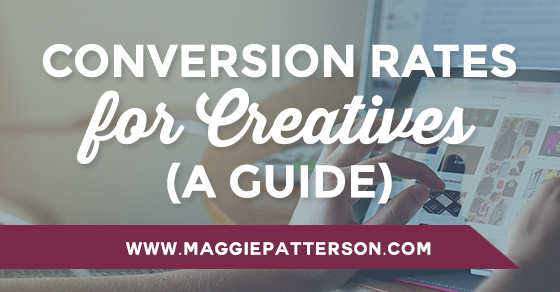 Do you identify yourself as a creative?

Yeah, me too. I’ve always been a creative. I was raised by a hippie photographer father, who valued creativity above all else. I grew up in a time of possibility and around people who didn’t have traditional careers, so I was fully encouraged to let my creative (freak) flag fly.

From a young age, I was a writer – that was how I expressed myself. Later, this gave way to my trying all kinds of other creative pursuits. So as you can imagine, something like math wasn’t my sweet spot. In fact, it has always been ewwwww….ugh….yuck for me.

I’m sure so many of you can relate. But as a creative business owner, I want to let you in on a secret: we can’t ignore math.

No matter how much we really want to.

80% of businesses fail in the first year. That’s a staggering number.

We’ve all heard that tried and true stat time and time again, to the point we likely don’t even think about what that really means.

Desensitized as we may be, we need to pay attention.

With those numbers, the odds of you failing are greater than of you succeeding.

How do you do better and ensure your success? How do you not become a statistic?

You measure your results.

You have limited time to work “on” your business, so why not make it more efficient? Focusing on your creativity and uniqueness alongside your conversion rates can give you an incredible way to be truly different than everyone else out there AND get results.

You know, results. The things that mean you’re succeeding. The tangible proof that all your heart and hustle is paying off and getting you where you want to go.

As business owners and especially as women, we tend to want to focus on feelings and emotions, not the actual outcomes. So we talk about wanting to feel a certain way, instead of a hard metric like people served or money made.

We’re doing ourselves a major disservice if we don’t measure results.

We’re never ever going to feel the ease or flow we crave if we’re not paying attention. Our feelings aren’t going to be the ones we deeply desire but ones of fear and frustration but most of all, we’ll be so flippin’ tired that we’ll want to quit.

What Happens When We Ignore the Numbers

Sure, we can ignore the numbers. But, when we aren’t paying attention, here’s what happens.

We turn into the chick at the party that’s in the powder room all night long because she can’t handle herself. And we’ve all had this moment – whether you want to admit it or not. It’s my job to make sure you aren’t that girl anymore.

Results. Numbers. These are things we can control. It just comes down to truly understanding the art + science of our marketing.

For example, last Fall when I relaunched this website, my business changed.

As soon as I launched a new site with a clear, totally me story, my business grew quickly. The difference: more me, more story and a better focus on converting my visitors into action. I grew my list by 1000 people, I was booking out months ahead. These relatively minor changes had a big pay off rather quickly. My website paid for itself many, many times over.

That’s not to brag, but it’s to show you’ve got a choice.

You can keep working harder and doing more, or you can focus on what you can control. Your story. Your conversions. Not just more busywork to make you feel like you’re getting somewhere.

Ultimately, this is about being smarter and letting the other stuff go so you can focus on the stuff you want to do. Not hustling hard and dropping from exhaustion.

Let’s take some time to actually talk about “conversions.” That’s the magical act where people sign up for your list or purchase from you.

In short, they take action on your site.

The idea of conversion doesn’t have to be scary, sleazy or all about the math.

Conversions is sort of like the weird creepy guy that a friend of a friend invited along to your party. You’re giving him the side eye all night, worrying he’s going to go through your underwear drawer when he heads to the bathroom, but once you get to know him, he’s actually kind of cool.

Conversion talk gets a bad rap with us creative types, which is why we’re going to get the bottom of conversion rates for creatives once and for all.

Why? For most of us, numbers and money are huge triggers. (Raising my hand – don’t worry, I’ve got this kind of baggage, too!)

Or maybe you see ranty dude bro marketers with flashing red buy now buttons that look like Web 1.0 threw up all over their sales page.

Or the fear that if you focus on conversion rates you’re going to have to turn into someone who uses hard core pressure tactics to close the sale.

No, No, and NO! Not for a second. That’s not at all what this is about.

Just because you’re working on these numbers doesn’t mean your business has to be soulless. It doesn’t mean you have to have a HUGE impersonal business. It’s just the opposite.

By focusing on this stuff you can be more efficient and spend MORE time focusing on your clients by serving them in the best way possible. Plus, you’ll actually be profitable so that you can grow exactly the way you want to. It can help you take the pressure off so you’re acting from a place of abundance and not fear.

Action = you’ve got a viable, sustainable business and are making money.

By understanding and tracking your conversion rates, you can figure out what’s working and what’s not so you can succeed.

For example, conversion rates typically run around 2-3% for most websites. But with the right changes and focus, you can increase those to 5% or even higher.

Imagine you have 1000 people coming to your landing page where you’re selling a product or service.

A 2% conversion would mean that 20 people purchased.

That’s more people impacted, more people served and you’re being paid fairly for your work. Win-win for everyone.

This is what’s at the heart of conversion optimization. You can haul ass to have more and more traffic, or you can tweak and tuck your site so that the people who show up get what they need.

Remember the creepy conversions dude? When you really break it down, this conversion guy isn’t so bad after all. At your party, he’s the one who stays until 3 a.m. helping you clean up the aftermath. And in your marketing arsenal, conversion rate optimization is reliable and trustworthy – the perfect balance to your creative whims and innovative ideas.

The Right Numbers Ensure Your Freedom

Start measuring so you are in control of your business outcomes and, most of all, your future. No more ignoring the “math stuff” and what’s really happening on your website.

Because if you do that, your business is going to be fine. In fact, it will be better than fine because you’ll know what’s what.

As creatives, we love our freedom. But the numbers are what are going to give us creative control. (And they don’t have to be scary!)

For me, they give me control over the growth of my business and now they’re my BFF. When those not-so-great days happen and I totally melt down, the numbers are my safety blanket that help snap me back to reality.

You, my friend, are in control of your business. Your business doesn’t happen to you or around you. You’re the host or hostess of this party, so it’s time for you to step up. Make friends with conversions and you may just be surprised where your business goes.

Orientation Weeks starts Monday, August 24th and we’ll be talking about conversion rates among other must-know things in your business.

This August, instead of deciding you’ve got 2015 handled, what if you tapped into that feeling and took your marketing back to school? And not to just any school, but the No B.S. School of Marketing, a place where you get to reinvent your marketing (and how you think about it).

Orientation Week is a week-long, 100% free event with a daily lesson. No fluff. You’ll get in and you’ll get out. Best of all, each day you’ll get something done in your business that sets you on the path to marketing success.

Get the details and join us by hitting the button below.