Launching Lessons: 7 Things I Learned from My Launch 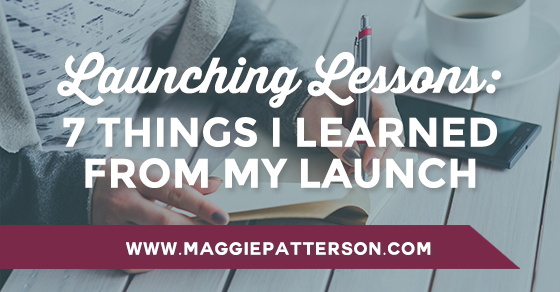 Time and space is a beautiful thing, which is why I’ve waited a few weeks before writing this post. I could have written it right after my launch, but I really needed time to process all of it and to get really clear on all of the tough launching lessons.

I started planning the No B.S. Marketing School launch in January. I’ve spent most of this year thinking about launching, so now that it’s all over and class is in session, it’s completely surreal. But don’t worry, we’re already busily planning our next launch…and I wish I was joking. But I’m not!

Here’s a rundown on all the lessons I learned from the Fall launch of the No B.S. Marketing School:

#1. Launching Doesn’t Have to be Insane

Yeah, don’t hate me. This launch all went pretty smoothly because we planned everything so far ahead and I didn’t want to spend my entire Summer acting like a launch-crazed maniac. Start WAY earlier than you need to so you have lots of breathing room.

Launching by its very nature is going to be hectic, but you get to choose how this goes down. Are you going to be doing it slow and steady or full on pedal to the medal? This launch taught me that it’s 100% okay to take your foot off the gas, and do things with a little more ease and grace. (Which, please note, is SO NOT my style. I’m more of a brute force and die empty kind of chick by nature.)

#2. OMG, So Glad this is NOT Paying the Mortgage

Launching anything has enough pressure, which is why I am SO relieved that there wasn’t the additional burden or stress of having to make a certain amount of money to pay my family’s mortgage.

Going into the launch, I had a clear budget and a target revenue goal in mind so that I knew what my “good” number was for registrations, but at no point was my profit from the launch designated to pay critical bills. And for that I’m immensely grateful.

For those of you that launch under those conditions, props to you. I’m not cut out for a launch-driven business, and I can guarantee there will always be client work and consulting income as the stable foundation for my business.

#3. Over Investing in Your Launch is an Act of Insanity

As I mentioned above, I spent a considerable chunk of change on this launch as I went totally pro on everything possible. That meant big invoices from my designer, and additional support from my team.

Investing in the launch was a conscious choice and not an act of chasing unicorns and rainbows. It’s far too easy to go into a launch thinking “don’t worry, I’ll totally make this back.” You can never 100% guarantee how a launch will go down, so don’t spend money that you haven’t yet made.

If you’re going to invest, make a point of figuring out how long it may take to recoup your hard costs related to your launch. And for the love of launching, please make sure you have a proven concept before you go all in. There’s faith and then there’s blatant acts of delusion where you kill yourself on an unproven idea and waste a whole pile of cash.

Biggest take away of my launch: My cart open was WAY too long for my liking and that won’t happen again. With the VIP cart open, it was 18 days total.

Which is great I suppose if you’re patient, but I’m not. It felt like a time warp where the days were going by so fast but the 18 days was sooooooooooo long. Makes zero sense, but that was my experience.

Next time it will be much shorter as I’m confident that we can get more done in less time or at least with the same result.

#5. You’re Unlikely to Beat the Odds

What would a launch recap be without some conversion talk? Listen here my special snowflakes – when it comes to conversion rates, unless you’ve been launching for a while or have some superpower, you’re unlikely to beat the odds of average conversion rates.

From the pre-launch sequence, we had a conversion rate of 2.5%. But if you look at how many people actually joined the Facebook group and were actively engaged, the conversion rate is closer to 5%. Which, given the level of content and value delivered that week, is a great affirmation of the content.

Going into the launch we did a considerable amount of list building, adding an additional 1000 people in the 60 days before the launch. That completely messed with our overall conversion rate on the general list, bumping it below 1%. If we exclude the “newest” people as they needed to be nurtured more, we were pacing above 1%, which is about average in our industry.

Lessons by the gallon right here. Starting with: you need to back into your goal for total signups and then build your list and grow your reach to support that. It’s easier to do that going into your launch than to project a conversion rate that may be completely bananas.

#6. You Will Self-Sabotage at Some Point

Let me preface this one with the fact that I typically am pretty good at following through on my plans, and I’d say I stuck to about 90% of the plan.

But I definitely bailed out on some of the list building activities we had planned throughout the year. I knew logically that to get to our “best goal” for the launch, I needed to really push harder and continue to focus on increasing my reach and growing my list.

Somewhere along the way I lost grip on the facts of what needed to be done and then decided it didn’t need to be done. I could make a big list of all of the reasons why, one of which is a need to prioritize existing clients, but the truth is, it was a case of straight up self-sabotage. The sneaky, quiet, rational kind where you justify the shit out of your behavior. It was in no way a catastrophe but definitely a lesson learned so I don’t get in my own way again.

Launching means you’re putting yourself out there, and that always means some people aren’t going to like your launch.

Reviewing post launch numbers, it was a bit sobering seeing unsubscribes along with a few spam complaints. (Speaking of which PSA – it’s not spam if you sign up for it and I can tell you when and where you subscribed.)

The truth is, not everyone is going to want to buy, and people leaving my list and moving on is ultimately a good thing. Maybe they’ll come back, maybe I’ve utterly offended them – no matter what the reason, it’s way better to have an engaged, active community via email than a big old list of people who are only tolerating you or have you in their Unroll.me.

[Tweet “7 launch lessons you don’t want to miss from @magspatterson. A real look at what it takes to launch.”]

There you have it. 7 launch lessons, and the start of many, many more to come. Now, I need to get back to my launch timeline for the Winter 2016 launch and planning a special event later this month that will get you in our next class with a sweet, sweet deal!

If you’re launching anything, you’ll want to grab a copy of the Launch Tools & Tech Cheat Sheet that shares everything I used for my launch and some awesome alternatives: 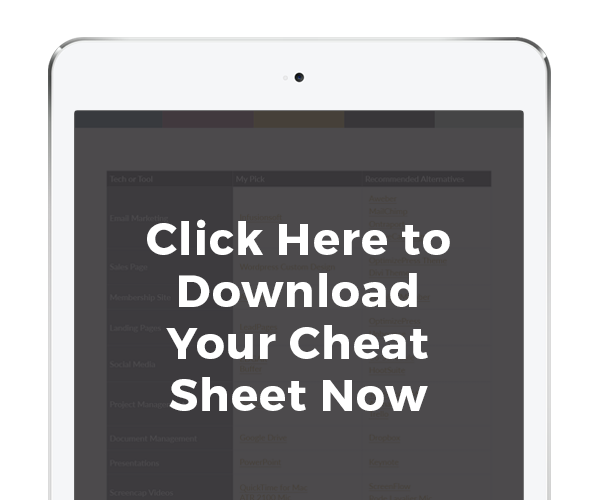