The Real Secret of Running a Successful Online Business 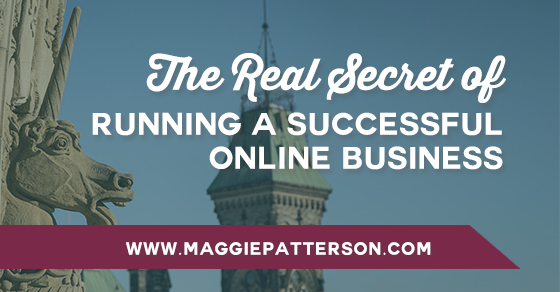 Friends, fellow entrepreneurs…lend me your eyeballs. For just a few minutes, and then you can get back to biz.

This hasn’t been an easy post to write. Not by a long shot, but it’s weighing on me. Literally nagging at me day after day after day. So here we go.

Something is seriously broken in our industry. I’ve written on this before and  shared my feelings about six figure talk, and it’s not about the money talk or sharing results, but rather, the fact we’re being conditioned like a bunch of mice in a science experiment to use that as our yardstick of success.

Don’t get me wrong, making six figures in your biz is a big deal. I know exactly how it feels to see it happen – having done it myself and for my clients.

But it’s a number. A number that may or may not work for you. Maybe your version of success is a $50K year or a $350K year. Whatever you want, decide for yourself and own it. This is your business, so don’t let it become a shorthand for how you measure success.

The truth is my six figures isn’t your six figures. I live in a town in rural Ontario, Canada. I likely have higher taxes, but an overall lower cost of living. I have socialized medicine by virtue of being Canadian and a husband with the Cadillac of benefits plans to cover the rest.

There’s a laundry list of dark side issues, but here’s a few worth considering:

If you’re on Facebook, you know exactly what I’m talking about. When you do the newsfeed scroll you are inundated with promises of six figure success all day long.

The list goes on and on and on. The real issue here is that even if you have real six figure success, this steady barrage of six figure promises devalues it. It makes us think that we can all ride in our our unicorns and party it up on our piles of sweet six figure cash that we made while we were sleeping.

This is SUCH a big challenge that as I’ve been writing a sales page for my new course (more on that coming soon), it took me days to be okay with pointing to some big client successes I’ve been a part of that are in the six figure zone. Quite frankly, it pisses me off that I need to labor over what are simple facts because I don’t want to be one of THOSE people.

Don’t get me wrong. I’m very proud to have been a part of these successes but owning that for my own marketing made me feel icky. Because six figure success is now a tired cliché.

I did decide to include them, but I crafted that copy with painstaking thought and detail so it made sense. This type of marketing preys on people and I’m unwilling to be a party to this. (We can see if I hit the mark when I launch in late August!)

There’s proof and then there’s promises. Often, I follow the trail to check out these people running ads with big fat promises and find out that they’re extremely thin on legit examples of who they’ve done this for.

Which brings me to my next point…

2. Real Success is a Pattern

Or even creating your own six figure business.

What the true pattern of success is being able to do it again and again. It’s having the experience and skills to replicate that for your customers.  And six figures aren’t mandatory.

What’s more important than the money made is the concept of mastery. So much of our industry is based on the concept of “you need to only be a few steps ahead” thinking.

Sure, for some things that makes perfect sense, especially when we’re talking a new social platform or something that’s evolving all the time.

On the flip side, I’ve always had problems with this concept. And not because I think we need to know everything, but rather how this idea is taken to extremes. Being a step ahead doesn’t meant you can take a course or read a blog post and then turn around and regurgitate it all as an expert.

I’m all for moxie and being bold, but proclaiming to be the expert when you’re as fake as they come and sliding on shit does no one – most of all you –  any favors.

The intent behind being a few steps ahead is for you to internalize what you learn, then apply it, test it, tweak it and refine it over time, then share it.  And not just do it in your own biz. That’s too small of a sandbox to really figure out how to make something work, and it takes a narrow view of what success really is.

Do you need 10,000 hours? Probably not. But you need a lot more than 10 hours to be selling it as a service. If you’re new at something, get practice clients, beta your offering, then test and test and test some more.

Then you can point to consistent results. And consistency is the sweet spot in a world where half of small businesses fail.

As someone out there spending your money in this industry, pay attention to consistency as the mile marker.

Not the new person on the scene with one big launch that everyone’s celebrating, but the coach with 5 launches where you’ve seen them improve incrementally. Or the person with multiple successful businesses that’s quietly doing their thing in a way that’s to be admired.  Or the consultant you’ve been following forever that shows up in your inbox every Wednesday without fail.  Or the graphic designer who’s been creating amazing brands forever and is so good that her business is 100% referral based.

Those are the people to look to: the quiet leaders, the unsung heroes, the super solid people you’d be proud to call your friend. Not the latest overnight success story, IT girl or fast talking guru, as they will come and go.

The consistent ones may not be sexy, but they’ve mastered their craft and are the right people to help you create success that sticks for the long haul.

And if you’re not sure about where to invest your money, remember that…

You’re shocked, right? We all know that people lie on the Internet, which is why you can bet your bottom dollar that many of these people shilling their six figure fix/solution/magical potion to you via Facebook and other mediums are full of shit.

Don’t believe me? I had a rather eye-opening conversation with some entrepreneurial friends not that long ago. (Places and names obscured as I’m not here to out people or point fingers.) More than one example of trumped up success stories and promises were discussed and this is NOT the first conversation of this nature I’ve had. From grossly exaggerated income to out-and-out lies, it’s happening out there. ALL.THE.TIME.

There’s many reasons people lie about stuff, from a serious lack of integrity right through to feeling that this is how it’s done. Whatever the reason, it’s not okay. Any time you feel the need to stretch the truth or push beyond the limit of what’s actually true, please stop. (And if anyone tells you to do this – fire them immediately.)

The goal should always be the strongest verifiable claim. That is, the best evidence you have that you do what you say you’re going to do. Sure, polish it up and make it look good, but don’t cross the line.

For those of you that are now questioning your faith in the online business world, this isn’t meant to be alarmist.

It’s the Internet, people lie all the time – so it’s up to us to turn up the BS radar and figure out what’s what.  You’d do the same if you were online dating, right? So do yourself a favor and get a healthy dose of skepticism to protect your bank account and biz.

Embracing the dark side and being wise to it may seem unpleasant or negative, but the reality is it exists. It’s real. And it’s not going away.

If you’re going to succeed and do it on your own terms with an online business, you need to be aware of the dark side. That gives you the power to consciously choose to create something genuine and true as you work on running a successful online business. For you to not fall into the lure of those that choose to play this way.  The online world needs MORE people with high integrity and low BS.