Taking a Break From Your Ideas 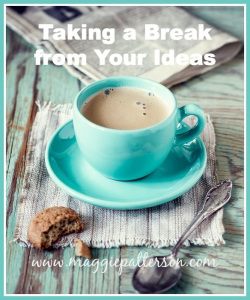 When you’re an entrepreneur, you live in hyper drive a lot of the time. Things happen quickly. In a world of “just ship it” and “better done that perfect” many of us become masters of taking ideas and putting them into action.

If you’ve never worked in government or corporate, this kind of get it done attitude is so freeing, not to mention how awesome it is to be able to have that much creative freedom.

But it’s way too easy to go too far. To get so focused on the “new” that you short change everything else you are doing. The result is a lot of half assed things that aren’t necessarily strategic for your business.

Personally I’ve been bewitched by the thrill of creating new things and seeing what would happen.

I know I’m not alone. Because I see this every single day. People constantly promoting and pushing because they acted on just one more idea…there’s a point at which all that hustling will backfire.

If you are in perpetual state of creating and promoting – this post is perfect for you. Taking a break from your ideas can be the best possible thing for your business. (And if you’re a procrastinating overthinker, don’t even think of using this as an excuse for a hot minute. This does not apply to you. Get back to work and just ship it.)

Last Spring I found myself in the midst of a launch that I didn’t want to be in. My gut was working overtime yelling at me not to do it. One sunny Saturday I woke up and decided we needed to pull the plug….good ideas and hard work be damned.

As I discussed the aborted launch with my project manager Brittany, she challenged me not to create anything new for 30 days. Blog posts, podcasts and guest posts were fair game, but no new offerings or programs or anything.

The first few weeks felt really long. I mean, I’m creative. I create stuff. It’s what I do. But then a bunch of funny things started to happen. I realized that doing more didn’t actually mean more. It just meant more hustle, with no real guarantees of more clients or revenue.

Then the real breakthroughs started.

My husband jokes that I have two modes – off and on. There’s no halfway with my personality, which means I have ideas. Lots of them. (Sounds familiar, right?) While I was on hiatus I realized that even my best ideas don’t need to be put into action. Ideas can stay as ideas and the world won’t end. (Even if it pains me.)

Instead of deciding to action my many ideas, I created a running list of ideas for later. As ideas hung out on that list, many of my most awesome ideas didn’t seem so fabulous a couple days or weeks later. I basically saved myself a potential business hangover by creating a place for sober second thought.

I now think of my list as the idea incubator where ideas need to go before they can become a reality. And I don’t have any hangovers from deciding to have one more cocktail just because it seemed like a good idea at the time. Because we all know there’s some things hair of the dog or Advil just won’t fix.

Maximizing What I Have

After deciding that I needed to use my time  focusing on what I already had in my arsenal, I went step-by-step through everything I was already doing and looked at how to do it better. From my podcast to my business systems, I left no stone unturned and created a master list of what needed to be improved.

Through this exercise, I became more productive as I cut out busy work and focused on things that have a direct impact on the business. I was able to increase blog readership and podcast downloads, while fixing things that needed some TLC. (There’s more to come…but this set me on a course for a much more mature and productive business model.)

That was so much more satisfying than launching something and then saying a little prayer. I focused on the things I can control the outcome of and put forth a little more effort to get bigger and better results.

By jumping off the hamster wheel, I found myself able to get super strategic. Time and space is a powerful thing.

By doing less and not acting on most of my ideas, some big things started to happen. Starting with pulling off two record months in my business by focusing on client work and bringing in new 1:1 clients versus being distracted by something that may (or may not) be a good idea.

And then there’s all the books I was able to read over the Summer as I wasn’t up all hours of the night working on my newest baby. Or the vacation time that was really a vacation. And a few really good naps in a lawn chair along the way.

Today, vision has replaced action. Patience has flourished as I choose not to jump on the crazy train to just get that latest and greatest idea out there. I now know that doing more does not mean more results.

Best of all, the hiatus is alive and well more than 4 months later. I have three specific ideas I’m working on, but they are literally taking months as I give them room to percolate, for me to do research and to totally nail them. Each of them are very much aligned with my view of the future, and not just focused on doing something for short-term gain.

These ideas may not even make it out into the world, but if they do, I’ll know they are the right ideas, not just the crazy whim I had on a random Tuesday night at 11:46 p.m.

Enough about me. If you’re a thrill seeking, idea generating entrepreneur, I challenge you to a 30-day hiatus from creating new things. Magical things may happen as you stop drinking your kool-aid and sober up for a bit. (Unicorns, glitter and rainbows are entirely optional with this type of magic.)

[Tweet “Magical things can happen if you stop creating + promoting for a hot second. Via @magspatterson.”]