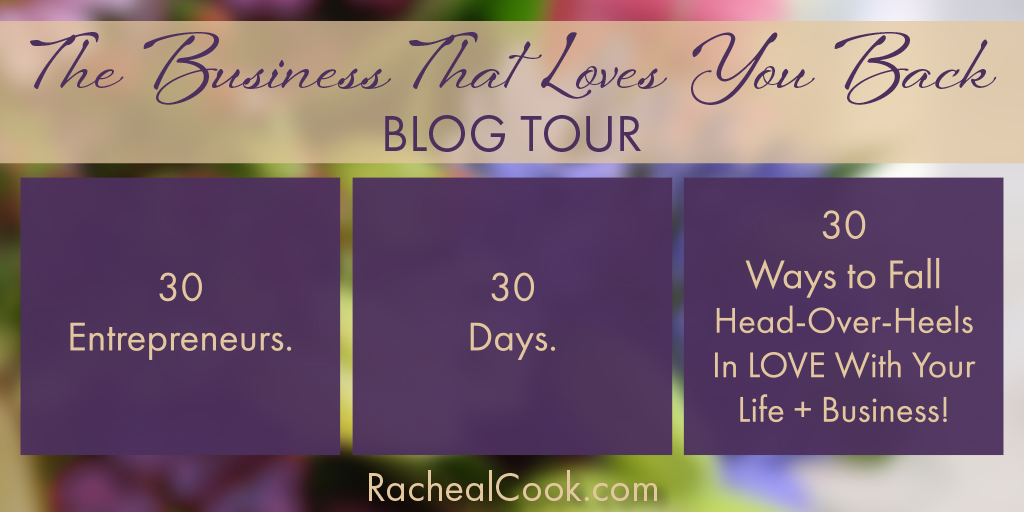 Today we’re doing things a bit differently, as I’m part of the amazing Racheal Cook’s Business That Loves You Back Blog Tour. It’s no secret that I’m a Rachael super fan ﹘ she’s a client and friend ﹘ but what I love about her most is that she’s 100% the real deal. Follow the #BizLoveBlogTour and don’t miss a post!

If you’re just joining us, check out Megan Flatt’s post from yesterday (she’s my go-to girl when I’m having a major mom/business meltdown), and tomorrow you can head on over to the always awesome (and fellow storyteller) Tea Silvestre.

And with that, I give you my post all about saying no in your business.

I’m a hustler by nature. I don’t know if it’s because I’m part Irish and Italian and that’s just baked into my DNA, or because I’ve always been hell-bent to prove everyone wrong. Maybe it’s a bit of both.

Growing up, I was never the superstar, the lead in the school play, the soloist in band, or the one who got noticed. This served to be a blessing in so many ways, as I could do exactly what I wanted and gave little concern to the rules or expectations. Pretty much anything I did was considered solid.

On the flip side, that also was a complete curse. By the time I had arrived at college to study communications, I was seriously being underestimated by the people who mattered.

The message from my program coordinators? I wasn’t good enough for the type of career I wanted. (To this day, I don’t think that was malicious, but more that they didn’t see my potential.)

That was a turning point. Suddenly, the stakes were too damn high, as I had a mountain of student debt and I wanted the BEST possible job upon graduation. Good enough simply wasn’t good enough any longer.

A Hustler is Born

Shit got real in that moment (debt will do that to a girl), and a hustler was born.

Over the years, that hustle has served me extremely well. I was able to land the position I wanted at a fast-growing PR agency and climb my way up to Account Director. I worked on coveted accounts and learned everything I needed to know to strike out on my own. Hustle is what helped me build the 1.0 version of my business quickly and keep a steady roster of clients for many years.

But with my online business (aka business version 2.0), that hustle was proving to be to my detriment. As my business grew, I said yes to more and more, until I started saying yes to everything.

To clients. To opportunities. To shit I really had no business doing. To continuing to run two other businesses on top of what I was already doing. To putting everything else ahead of myself.

Late in 2014, I realized that the problem was that my hustler woman had become a yes woman. And not in the goes-along-with-everything, people pleaser kind of way; rather my default answer for everything was yes.

It had to stop if I was going to stay sane.

I knew if I was going to grow a business that loved me back, I had to love myself enough to say no. Why could I say no to making beans for a church supper while the business version of that request felt freakin’ hard?

Most of all, I had to stop trying to prove to the world that I would be successful. The brutal truth was that at this point in the game, I’ve exceeded every expectation I’d ever set for myself, or that anyone had ever set for me. I was already successful beyond measure, and there was really nothing left to prove ﹘ except maybe to that voice in my head.

My life, my family, my health and my sanity are more important than proving to anyone ﹘ especially that nasty bitchy voice in my head ﹘ that I was good enough. Because I am simply awesome, thank you very much, bitchy voice be damned.

So now, my first answer to everything is no. If it’s not a hell yes, it’s a hell no every. single. time.

By serving myself better, my business loves me back so much more. I’d say we’re having a bit of a love affair at the moment. And don’t worry, my husband is fully aware. He sees the change in me and how I do things, especially when I actually go to bed with him at night instead of burning the midnight oil until 2 a.m. (Full disclosure: I do stay up late still sometimes working, but by choice, not out of necessity.  I still do my best work when the world is quiet.)

I’ve made space for growth in a way that has me doing things in a way I’ve never done before. Not everything has to be rushed. Amazing clients are showing up in that space, and I see a bright future where I’m not running off little sleep and lots of caffeine.

I won’t lie. Saying no is hard. But every time I say no, it gets a bit easier. No. Two letters, a small word that has helped me build a business that loves me – because it’s my business at the end of each day, not someone else’s. If I don’t love it and it’s not loving me back – then what the hell is the point?

[Tweet “Build a biz that loves you back. Otherwise WTH is the point says @magspatterson #bizloveblogtour”]