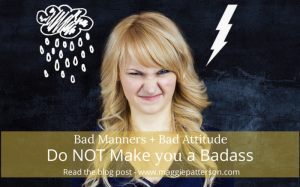 Growing up I was always one of those kids that sort of did my own thing. I wasn’t super concerned with what we were supposed to do or following everyone else. I wore what I liked, I was friends with a variety of interesting people, and that was a recipe for being pretty happy overall.

I’ve always wholeheartedly embraced anyone who is outside the norm. Which is why I feel so uncomfortable with some of the behaviour I see in online groups I’m involved in. As much as I’m all for self-expression and being yourself, I cannot stomach people who are trying SO hard to be different. Who are literally going out of their way to act a certain way or deliberately trying to be a badass.

Case in point is a social media post I witnessed last week with someone literally boasting about being extremely rude to a stranger. While I wasn’t there to witness the situation firsthand and I don’t know this person’s whole story, I stopped in my tracks. I don’t know what hit me harder – the fact that this person was trying so hard to be a badass, or that people were so freely showing support for someone acting like an entitled, spoiled brat.

Both of those things are bothering me days later. Having bad manners and a bad attitude does not make you a bad ass. The more you tell me you don’t give a fuck, the more you likely do in my mind. Because if you really were a badass you’d be comfortable doing your thing and not be running back to your peers for a gold star. (Wheee…look at me…I’m SUCH a badass!)

While I definitely have a soft spot for rebels, freaks and badasses, it’s only if it’s legit. I can smell a phony a mile away – call it gut instinct – but there’s a sad desperation to wannabes.

As for the supporters, I’m giving that a giant WTF. When did having a giant chip on your shoulder become acceptable? How can so many of these people talk about kindness and living “authentically” on one hand and then so blindly support this type of malevolence?

It may seem funny or harmless, but giving out that gold star only encourages more unconstructive f-you type behavior.

[Tweet “There’s no excuse for bad manners. Or a bad attitude. Because both are bad for business.”]

When Taking a Stand, Handle with Care

Right or wrong, in the online world, judgements are made in a split second and your job is to give people a taste of what to expect from you. Do you want them to take away that you are a mean and nasty piece of work that “doesn’t give a fuck”? Is that going to help you reach your goals?

Because I can tell you I would never in a zillion years give someone behaving like an entitled asshole my money or my respect. And I know I’m not alone on that one.

Are you supposed to be Mary sunshine and pretend it’s all lollipops and rainbows? No – of course you need to  be honest, but you want to handle thing with care and be thoughtful with what you say and when you say it. Because you don’t want to get a rep as the angry girl.

Taking a stand is critical to your message and helping to prevent you and your biz from being a snore inducing flavor of vanilla. The key here is to be purposeful and not sound off on every single thing that pisses you off.

Have you ever had someone in your life who’s always up in arms about something or full of snark 24/7? Yeah, me too. It quickly gets tired and you don’t really want to be around them. Soon, you find yourself going out of your way to avoid them.

If you are going go to the effort to build a business and market it…I’m assuming you want people to be part of your community and to work with you. So constantly ranting and raving without being productive is a recipe for disaster.  (And you very likely do not want the pain in the ass that comes with customers that are attracted to that.)

Here’s a few ideas to help you figure out where to put your stake in the ground and when to zip your lip:

Speaking up, being thoughtful about it and really owning it. It’s not about having many tattoos, multi-colored hair or any external packaging. So lose the chip on your shoulder, hold your tongue and embrace the fact that you don’t need to be right all the time.

That’s real leadership and the kind of person that people really want to work with. That’s the foundation for long-term respect and success.

Bring me your comments. Let’s get this party started and talk about taking a stand without being a brat.